What an epic week for my book collection.

First, I was gifted these beautiful volumes of The Annotated Shakespeare.

This book sale takes place in an industrial building (I think maybe a warehouse) that is full of books. Tables upon tables covered in books and those tables have boxes upon boxes of books underneath them. And all of them cost $1 to $3. Heaven.

Book sales are great for a few reasons:

I went twice. The first day, I went during my lunch and thus had time constraints. That day is a complete blur – when I got back to work, I had no idea what I just bought. When describing the experience, I compared it to the game show Supermarket Sweep, because I was furiously running up and down the aisles just grabbing things I saw that looked good, barely registering what it was that I was grabbing. It was exhilarating.

I knew I had to go back again; I had unfinished business and I needed more time! I returned the next day, this time with a friend, and we enabled each other to buy everything our hearts desired.

As it turns out, everything our hearts desired filled a shopping cart to the point of spilling over.

The funny thing about going to a book sale and filling a shopping cart with books (yes, they had shopping carts, and yes, it was genius, and yes, ours was overflowing – literally) is that everyone asks you, “Are you a teacher?”, and then you are met with the greatest looks of shock and disbelief when you and your friend proudly respond, “Nope, these are all for us”. We had so many books in our cart that people stared at us as we walked by. It was glorious and one of the best reasons to have people staring at you, in my opinion.

I didn’t find many of the books I went looking for, but I sure did find a lot. Here is what I bought, organized by category (and in no particular order otherwise): 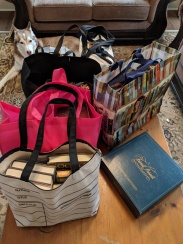 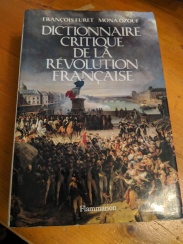 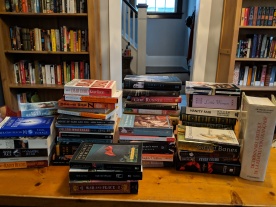 I am a happy book worm.

That’s all for now! May your book sale adventures be as fruitful as mine.