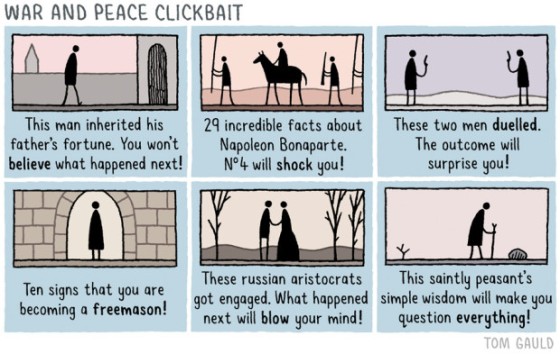 Tom Gauld on War and Peace – cartoon for The Guardian

After almost 8 months (and what seems like an eternity), I’ve finally finished reading War and Peace.

And before you ask, yes, it has periods of both war and peace; it’s not one or the other. Actually, it’s kind of always war and always peace. And sometimes, it seems like the “war” parts are more peaceful than the “peace” parts, and vice versa, so there ya go. Not in an Orwellian “war is peace” doublespeak kind of way, but in a “some find peace in war” kind of way.

The “war” parts were hard for me to follow, primarily because, to the very end, Tolstoy insisted on introducing umpteen-billion new characters in every war section of the novel. (Okay, I’m exaggerating – but you get my point, it was a lot.) These were throw-away characters for the most part, too, or historical figures that Tolstoy wanted to make a point of mentioning once or twice and then NEVER AGAIN. Why do you torture me this way, T? I thought we were friends.

Can we also talk about how Tolstoy originally published W&P between 1865 and 1869 (i.e., over a 5-year period)? These people originally had 5 years to read this tome and I feel like that’s an appropriate amount of time over which to expect people to read this book. I did it in 8 months. Just throwing that out there for all you folks judging how long it took me to read this beast (*cough* it’s me, I’m judging myself *cough*).

Side Bar: I also read 5(ish) books on the side while I was working on W&P so that may have contributed to the time it took me to read it.

Deception and Betrayal: The Tale of the Abridged Version

I started out reading a version of W&P that I thought was unabridged. I had good reason. It said “original version” on the cover and did not say “abridged” anywhere on it. Usually, abridged versions of classics have the common decency to tell you straight-out that they are the cheaters’ version. Well. This was not the case for the print copy I had. It was full of lies and I felt so betrayed, friends.

Thankfully, at the time I discovered its deceit, I had progressed through the book mostly using the audiobook (which was definitely not abridged). That’s actually what helped me figure it out – I had about 80 pages left in my print copy and 20 hours left on the audiobook, which did not add up at all.

As soon as I realized I was being taken for a fool, I ditched the print copy (made beautiful art out of it, actually), downloaded an unabridged ebook version, and continued on. 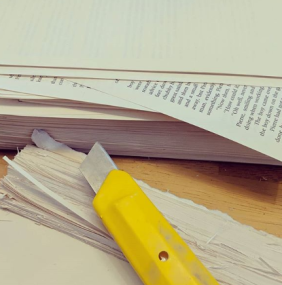 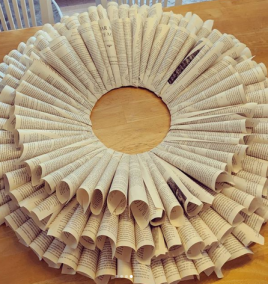 It made a beautiful wreath, but I was so heartbroken. Will I ever trust a book again?

At the end of the day (cue Les Mis soundtrack), I don’t think I read this right. I certainly didn’t do myself any favours. For the most part, I read it to get through it, instead of reading it to enjoy it/appreciate it. I think I would have gotten a lot more out of it had I taken the time to slow down (yes, slown down – you heard me – I know it seems like a ridiculous thing to say considering how long it took me to read this book) and look up the historical references and figures Tolstoy took the trouble to incorporate into this book, or really relish the character development, or pull out a map and figure out where the EFF these battles took place and where the troops were moving. Any of those things would have enriched my experience tremendously, and that’s just scratching the surface of what I could have done.

The unfortunate thing, and how I really know that I cheated myself, is that when I dialed myself in and paid attention, I really enjoyed reading W&P. I found it to be interesting, and sometimes surprisingly hilarious, like when the boys tie a police officer to a bear, or when Pierre is trying to insist he’s not a Frenchman but the Frenchman insists that he is one because he’s nice and all Frenchmen are nice therefore he must be a Frenchman, or when Andrei (or Nikolai? It was a long time ago. I forget) throws his gun at an enemy soldier because he doesn’t know how to shoot it – to name a few. I also found it to be smart, and it had all kinds of tangents and rabbit holes I could get lost in. But I had a mission, dammit, and I was going to finish this book – distractions be damned! Onward, I said!

Readers, I think I messed this one up. Do I get a mulligan? Yes. Will I read it again one day, the right way? Maybe. I’d like to. I think what I’d really like to do is break it up in to its orginal 6 volumes and read it over the 5-year period its contemporaries got to take it in. That would give me the time I needed to do the things I really enjoy when I’m reading a book (not to mention finish my character map, which, sadly, I abandoned about 3/4 of the way through – I can’t go back now DON’T MAKE ME PLEASE).

Will I read the Second Epilogue again? No. Never. You can’t make me.

I really wish I had blogged along the way, so that I wasn’t doing one monster here-are-all-the-things-I-thought-about-this-book post, but here we are. It’s hard to know what to leave in and what to take out, so as a happy middle-ground, I thought I would provide my thoughts for you in bullet-point format.

War and Peace: Reactions and Reflections in Bullet-Point Format

I’ve said this before and I’ll say it again: having someone read along with you is just the very best. They can relate to the struggle, and when you text them randomly with, “Dude, shit is going down.” They respond with “I know right”, and when you say things like, “Natasha is turning into a real Lydia” and, “Rostov is such a POS”, they just get you, you know? It’s great. Highly recommend. Would read with again. 10/10.

On a more serious note, I’ve been at this thing alone for a long time now. It’s nice to have someone in the trenches with you. Reading is such a solitary sport, it’s easy to forget how communal it can be. How it can be a tool to build community and develop friendships and connect to people. The absolute joy of being able to explain in horror, or excitement, or joy, or whatever, your reactions to the story – the ability to experience a book with someone instead of in solitude – that is magical.

It takes a special person – nay, an exceptional person – to agree to read War and Peace with you. I’m grateful.

And, as a reward for reading W&P with me, I’ve given my reading buddy the honour of picking the next List read from The Bowl. Until such a time as we’re able to arrange for this to happen, I’m free to read what my heart desires. So, I’ve picked up The Left Hand of Darkness by Ursula K. Le Guin.

2 thoughts on “From Russia with Love”