I finally finished Charles Dickens’ Great Expectations this morning. ToTC was better, in my estimation, to be quite honest.

An interesting tidbit I learned from my Audible audiobook was that Dickens originally wrote a different ending (which I also listened to as it was available with the audiobook) which was not as upbeat and cheery as the ending we all know today. It would appear that right before publishing, Dickens felt that the story needed to end on a happier note, so he re-wrote the ending. I’m terribly sorry, Mr. Dickens, but it would appear that the 19th century definition of a happy ending is considerably different from that of current times. We have deeply differing views on happiness, you and I.

I was honestly looking forward to watching the 2012 film adaptation of Great Expectations (directed by Mike Newell) for a few reasons, but primarily because I am confident that it will change my sentiments towards this story – and make me love it.

It makes me incredibly sad that I haven’t been able to find this movie anywhere – was it not released in North America?!? With a cast that includes Helena Bonham Carter & Ralph Fiennes and the freakin’ Harry Potter GOF director it’s setting up some pretty great expectations of its own.

Please, if you know where/how to see this movie in Canada – tell me!

After some herculean reading efforts yesterday, I’ve managed to make it to the 70% mark, which I think warrants me a pat on my back. Reading Great Expectations has been, thus far, an exercise in commitment and perseverance. I have become ever more grateful to my Kindle because when reading off an eReader, you aren’t able to viscerally feel the cumulative weight of the pages you have left to read. This is a gift.

The story is not without some interesting arcs, and I’ve finally discovered who Pip’s benefactor is. A few things surprised me here:

(2) I didn’t expect it to take as long as it did to confirm Pip’s age: I went from making guesses at his age for the first half of the book, to having it spelled out for me twice within a handful of chapters – Dickens, you spoil me.

And finally (3) -not really a surprise- turns out that lingering feeling I had about the importance of the convicts was right after all.

I would have expected Pip to feel more grateful to the convict for his good fortune, for facilitating his reaching his ‘great expectations’ – but I suppose he is too preoccupied with social hierarchies to see beyond that in those he deems to be below him. Which is the point Dickens is trying to make, I suppose.

Where this book has been an exercise in persistence for me, it is an exercise in posturing and self-promotion for the characters. Each one is so concerned with being ‘proper’ and eager to climb up to the next rung in the social ladder (with the exception of Miss H. and Estella).

Admittedly, Dickens does (did) have a gift for crafting really interesting relationships between his characters. I started working my way through the unabridged audiobook of Great Expectations (narrated by Frank Muller), oh I don’t know, let’s say two weeks ago. It’s taken me that long to get to Chapter 15 and I’m still not quite sure I understand what the hell is going on. Granted, this could be because I listen to it while I’m driving and maybe don’t give the old classic my undivided attention.

So far I’ve gathered that there’s a young boy of an undetermined age (I can’t figure out if he’s 4 or 21), Pip, who has a horrid and abusive sister, spineless father/brother-in-law, and the coolest character by far is Miss Havisham.

Miss H is awesome and hilarious. A big bonus is that she pays people to hang out with her: “Thanks for the card game and taking that verbal abuse with a smile, Pip – here’s a bucket full of money” (okay, I’m paraphrasing). I doubt that Dickens intended her to be the comedic relief of this particular book, but I must admit that I smile a bit whenever she enters the scene. She reminds me of a certain spirited woman I know, which makes the character of Miss H all the more endearing to me.

I think I’m supposed to be paying more attention to the part of the story which involves the escaped convicts that Pip helped out, but so far I am un-enthralled.

Initial thoughts: I have a hard time with Dickens. I fought through A Christmas Carol when I read it, and I dragged my feet through Tale of Two Cities as well. That being said, at the end of the day I was really happy I read ToTC – making the score 1-1 for ol’ Charlie. I don’t know if ToTC won me over because of my love of the French Revolution, or if Dickens pulled it off. I guess Great Expectations will settle the tie. 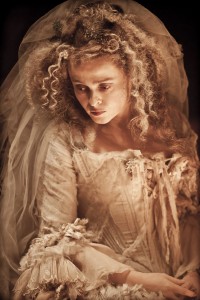 February 28th: the best thing about this book right now is that it has an ending (made it to Ch. 24)