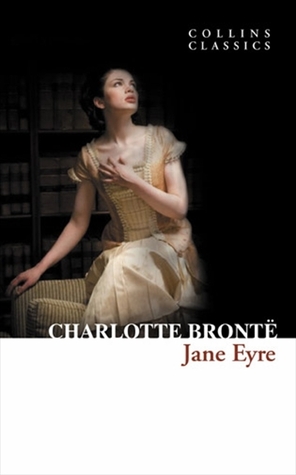 And that’s about all I have to say about Jane Eyre. This was not a particularly exciting read for me. Again, I’m fairly certain that this is because I knew the storyline fairly well prior to even picking up the book. It’s hard to get into a story when you know what’s going to happen – none of the twists and turns are actually twists and turns, just eventualities. And that ruins all the fun, doesn’t it?

Unsurprisingly, the primary male characters in this novel did not endear themselves to me. Rochester is a self-centered, indulgent, whiny jerkwad. Who locks one wife in their attic then seduces their 19-year-old governess (a thankless trade already associated with prostitution) into a fraudulent engagement and then has THE NERVE to act like he’s the injured one when she leaves? Jerkwad.

St John is not much better but I’m willing to chalk his behaviour up to being socially awkward and singularly focused on his own pious ambitions. Selfish and a bully? Absolutely. Deliberately manipulating a young woman with false promises and emotional blackmail? Nope. Yes, he pulled some HARSH guilt trips to try to get her to go to India with him, but what good Christian doesn’t? Amiright.

Overall, I give this book three shattered hopes out and twelve empty promises out of a lifetime of submissive servitude.

Overall, I’m happy to have this classic under my belt. Before I had read it, I always felt like I was missing something, like I was a fraud myself pretending to be part of the book-lovers club without having paid my dues. Especially since I’d read so many of Bronte’s other books, it felt just…incomplete…to not have read the one that made her famous, at least by modern standards. I think I would have gotten a lot more out of this book had I had the opportunity to study it in an academic setting; similar to my sentiments towards Emma. Had I read Emma on my own, I don’t think I would have liked it very much or at all. But reading it for critical discussion and dissecting it, analyzing it in detail, and building a thesis around it gave me a finer appreciation for it. As a result, I would say I’m a fan. Maybe, if Jane Eyre had been given the same chance, I might feel differently. I guess we’ll never know.

The good news is that I have started reading Wide Sargasso Sea which everyone tells me is magnificent, so I’m excited for that!

One thought on “Jane Eyre”